After being diagnosed with type 2 diabetes, many truckers wonder what kind of diet they should begin to follow. "There's not really a one size fits all diet," says Laura Wahl, RD at Healthcare Services Group. Instead of following a strict, specific "diabetic diet," Ms. Wahl recommends portioning out your daily carbohydrate intake in order to keep blood glucose levels in check.

"Allot a certain number of your daily carb allowance toward each meal and try not to go over that. Don't make your portions so big that they affect your blood sugar," she says.

How many carbs can a diabetic trucker have daily?

As a general rule of thumb, limit carb intake to between 45 and 65 percent of your daily recommended calorie intake. So for a man aiming to eat 2,200 calories a day, no more than 1,430 of those calories should come from carbs.

If we're talking total grams, try to eat about 130 grams a day, split evenly across meals as Ms. Wahl recommends.

What Should Diabetic Truck Drivers Eat?

Don't let the term "diabetic diet" scare you. A diabetic diet for truck drivers is really nothing more than "a healthy diet." The only difference is that diabetics have to watch their intake of high-carb and high-sugar products as they can send blood glucose levels spinning out of whack. As with any healthy diet, a diabetic trucker diet is rich in fruits and veggies, whole grains, and lean proteins, and low in added sugars, simple carbs, and saturated/trans fats. 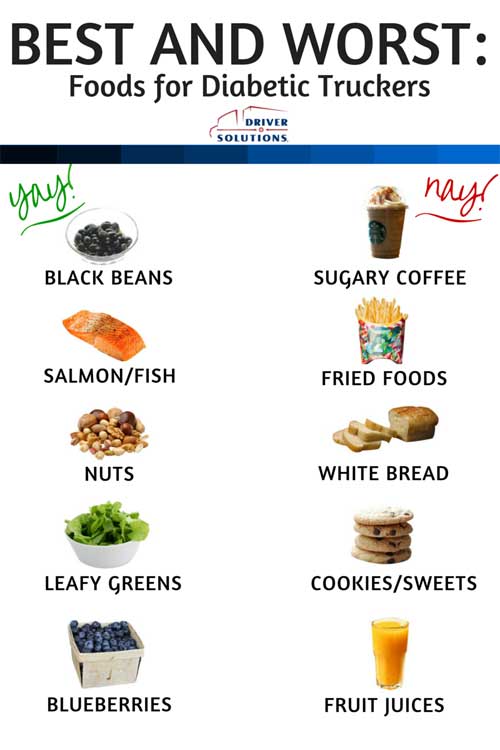 Avoiding the foods that litter the shelves of truck stop convenience stores isn't always possible, but there are some options that will still keep truckers healthy on the road, such as:

What Should Diabetic Truck Drivers NOT Eat?

There are certain foods truck drivers with diabetes should try to avoid as they can greatly affect glucose levels. "To be honest, [avoid] most of the foods at a gas station," Wahl says. She notes that due to the nature of the truck driving lifestyle, this isn't always feasible;  in that case, make the healthiest choice you can using some of the recommendations from above.

Of the many unhealthy snacks at convenience stores, Ms. Wahl recommends avoiding the following like the plague:

Not only do these types of foods and beverages have nothing to offer nutritionally, but they'll also majorly screw up a truck driver's glucose levels. 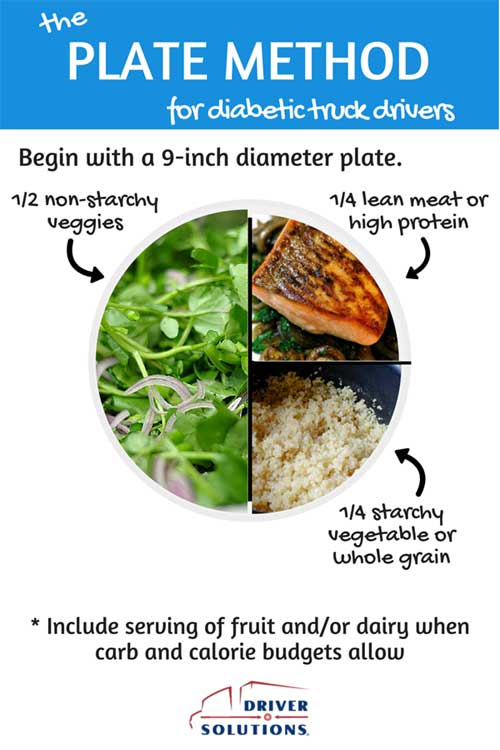 A Diet Plan for Truckers

"For an on-the-road driver, the best thing to do would be to portion out meals at home," says Wahl. "It may take some time, but ultimately it's the best way to eat healthy and stay on track." She recommends bringing snacks on the road with you so you're not tempted to stop at the Flying J convenience store for a bag of chips and a Mountain Dew.

When drivers are planning their meals, they should try to follow the "plate method." You've probably heard a variation of this before. Aim to fill half of your plate with veggies, a fourth with a low-carb starch, and a fourth with a lean protein. This is a good guideline for eating healthy at every meal.

Much of eating a trucker-friendly diabetic diet comes down to personal situation and set up, but fortunately, it doesn't require having too many fancy kitchen tools and storage devices. Simple fresh and canned fruits and veggies are great options to keep on the road (just make sure they're in juice, not syrup). 100% whole wheat breads and English muffins will keep for quite a bit on the truck. With the help of a refrigerator and a slow cooker, a truck driver can greatly increase the amount of meals for diabetics that can be made on the road.

To give truck drivers a frame of reference for planning out their meals as a diabetic, here's a sample week's worth, courtesy of glucerna.com: (based on a 1900 calorie diet)

Following a truck driver diabetic diet can be done, and plenty of truckers are doing it! Sure, it requires some additional planning compared to a typical trucker's diet, but what are the alternatives? Unmanaged diabetes can lead to a host of complications that can end a trucker's career, which is why it is so important to get that diet on track before it's too late.

Combine these tips on a diabetic diet with these tips on diabetic exercise plans (link to exercise post) and take control of your type 2 diabetes! You may have the diagnosis, but you don't have to be a statistic.