I'm positive that anyone in Atlanta knew where they were this day if you asked them. I just happened to be right there in Atlanta as well. My photos on this blog nowhere near tell the story about how crazy it got on this day (and the days to follow) in Atlanta and most specifically on I-285 the beltway around Atlanta and I-75. The biggest thing I learned this day is that Americans are still great and when catastrophe hits, people will indeed show how big their heart is.

I delivered a load late the night before and I went to the Atlanta yard for the company I was working for. The meteorologists weere definitely predicting something the next day. The question was; How bad would it be?

When I awoke the next morning, I kept asking my company to get me a load ASAP, so I could try to make it out of Atlanta in time.  I received a load in the early afternoon. I thought for a brief second, maybe I can beat this thing. Let's get out there and try. With the long delay in getting me a load, and me not listening to my better senses, I left the Atlanta yard and proceeded on I-285. I would go on to regret that move. 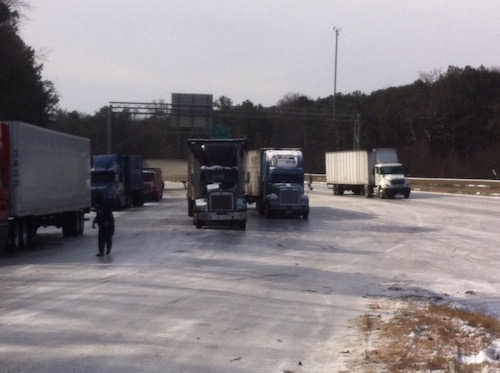 Then the Snow Starting Falling

I wasn't one hour into me leaving the yard when the snow came. The snow melted on contact, and it was a lot of snow melting. Then, maybe 1 hour later, the temps dropped and dropped dramatically. Anyone who happened to be on I-285 or I-75 at the time where now dealing with a full blown ice storm. As history would prove, EVERYONE who worked in and around Atlanta tried to leave the city and suburbs at the same time to try and beat this monster. When the cold temps went even colder, all the melted snow, quickly made travel impossible.

On a side note, I remember all the jokes in the weeks following about how people in Atlanta can't drive in 2 inches of snow. The jokes and memes where plentiful. But as someone who grew up in Michigan (I've also been to Alaska 4 times and all 50 states, including driving truck in snowstorms in North Dakota on I-94), I can say with certainty that no great Northerner would have been able to escape this winter storm. With the combination of everyone leaving, then I-285 and I-75 turning into an ice rink, people where left stranded. This is where this story doesn't get ugly, this story shows the generosity of the South and more particular the good soles of the Atlanta people.

Thinking About a Career In Truck Driving?

If you're considering a career in truck driving, look no further! Driver Solutions can help connect you with a company that will not only pay for your training, but will also have a job waiting for you once you successfully complete truck driving school. Find a current job opening in an area near you by clicking below!

Find a Job Near You

I was stranded near exit 10, on I-285. I was very close to an exit. There's a Petro off that exit. I was prepared in my truck. I had full fuel, (I filled up at the yard), I had a week's worth of food and water in the truck, and other amenities. But I soon learned that so many people in cars were not as well equipped to deal with this emergency.

There were some 2,000 cars abandoned during this storm. Many people didn't have enough fuel in their car or truck to survive the brutal cold. Most had no food, and all of us where going nowhere. I didn't carry chains at the time. If you saw any pictures of the massive traffic jam, chains would not have helped the first night. Most cars and trucks where stalled and stuck in traffic. The chains came in handy the next day and a few days afterwards.

When night came and the sun began to set, this is when people all came together. So many people opened up their homes to the stranded motorists. Truckers like myself made sure people around us had water, food and warmth. Many truckers and myself spent around 5 hours that night, working with so many other people helping other trucks and a very few cars up the Exit 10 hill. That hill isn't that big, but when it's icy, oh my! One 4 wheel truck took about 6 of us truckers to push it up that hill. We did that, one by one. Every single one of us worked together. There was no questions about political affiliation, no questions about race, every single one of us helped any way we could.

As the storm bears down on Atlanta tonight as I write this, I wish them good luck and my understanding is the governor has already asked that the fine people of Atlanta leave work way earlier than in 2014 so not to repeat the 2014 disaster. It was a disaster in terms of a city being paralyzed. Yet, I would suggest that it was Atalanta's best hours in many regards. What many people made fun of on social media, the people that where in that storm knew how serious it was. I will never forget where I was January 29, 2014. I will never forget because I believed I witnessed our human spirit at its best.

Wayne got his start in trucking by going through the Driver Solutions company paid CDL training program back in 2012.  Since then, he has traveled over 300,000 safe miles and counting! After seeing his photos and reading about his adventures, we knew we had to share them on our blog. Join Wayne on his journey for a first hand look at life on the road!