CDL training students get a lot out of their experience at school - a Class A CDL, real-world hands on driving experience, and friendships with other students and instructors. But how about finding true love? From day 1 of truck driving school, Jason and Markie were inseparable! Watch the video below to find out the rest of their story...

When Jason Napier arrived at truck driving school ten months ago, he never expected to meet the love of his life.

Jason and Markie Collins are a real life example of love at first sight. They met before the first day of class while waiting on the doors to open. They hit it off when they began talking and the rest is history.

Jason and his future wife immediately formed a bond while at trucking school. They spent all of their time together and helped each other out with their studies.

Jason and Markie decided to team drive together with PAM Transport while at school  so they could work together and continue their relationship out on the road. 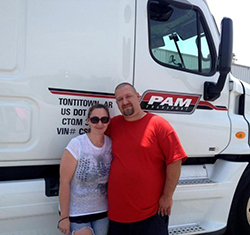 A Visit to the Chapel

Jason and Markie began driving over-the-road in September of 2011 and were married shortly after in February of 2012. But how do you get married when you spend upwards of 20 hours a day driving across the country? That sure doesn't leave much time for wedding planning.

“We got married in Dallas while we were out on the road. We got a pit stop, had enough time to take a break… and we went and got married,” Jason says. The state of Texas requires a 72 hour waiting period for the marriage license to become valid. Because of this, Jason and Markie had to ensure that they stayed in Texas long enough to fulfill the waiting period requirement.

Teaming as a Couple

Jason and Markie both agree that team driving with their significant other works out well.

"Who else better to team drive with than your significant other?"  It certainly makes things easier when you've already built up that trust and can "hit the ground running."

Married team drivers are becoming increasingly more prevalent among trucking companies nationwide. Couples already know that they get along and trust each other, and there's no awkward, "getting to know you" phase.

Jason explains that team driving with your spouse can sometimes be difficult because you can't escape to a different room or go to a different job like you can at home; however, many married couples say that their relationship is stronger because of this. When you have no where to escape to, you're forced to talk it out or face an uncomfortable next few days.

Would you team drive with a significant other? Why or why not?

Are you ready to start a new career as a truck driver? Then fill out our no obligation online application to get on your way to finding a truck driving job opportunity. From there, you can schedule a time to speak with one of our Driver Agents about your options.