The first year in a truck driving career is typically the most important.  It's a lifesyle adjustment and it takes time to gain some experience before you can get advancement opportunities.  Coming into a truck driver job with no experience can also be a bit intimidating.  For most, it's that first year when they are able to adjust to life on the road. 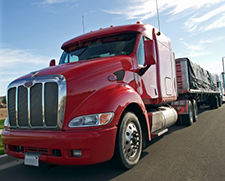 Starting off, most will be working in an over the road (OTR) job.  This means they will be out on the road for about 2-3 weeks at a time before heading back home for a few days.  I recently read this post titled My First Year As A Truck Driver over on the Trucking Truth Blog.  In this post, Trucker Mike gives us a look into his first year out on the road.

One of the biggest rewards for him was getting the chance to see "more of this country than most people see in their lifetime" in just one year.  Mike was able to travel to all of the lower 48 states with the exception of North Dakota.

He goes on the say that the freedom that comes with not having a boss over his shoulder was there, but in a different way than what he originally expected.  This is because techology has made it easier for trucks to be monitored at all times.  He was still able to have the freedom of being out on the road in his trucking job, but it isn't the same "freedom" as it used to be.  That being said he does say that it's by far the most independence he's ever had in any job and the ability to set his own schedule from time to time is very nice.

For some people truck driving is just in their blood, and Trucker Mike appears to be one of those people.  He says that he has never grown tired of traveling the open road in his trucking job.  While the thought of being alone behind the wheel may scare some, he explains that for him it's much better than dealing with co-workers and phone calls all day.

It's great to read stories from drivers in a trucking career that are taking the time to share their thoughts in a blog.  We always recommend talking with other truck drivers if you are looking to get into the industry, but reading some respected driver blogs can provide some great insight as well.  We want our CDL training students to be fully prepared for life on the road and have realistic expectations for that first year.

Be sure to check out the full blog entry here.