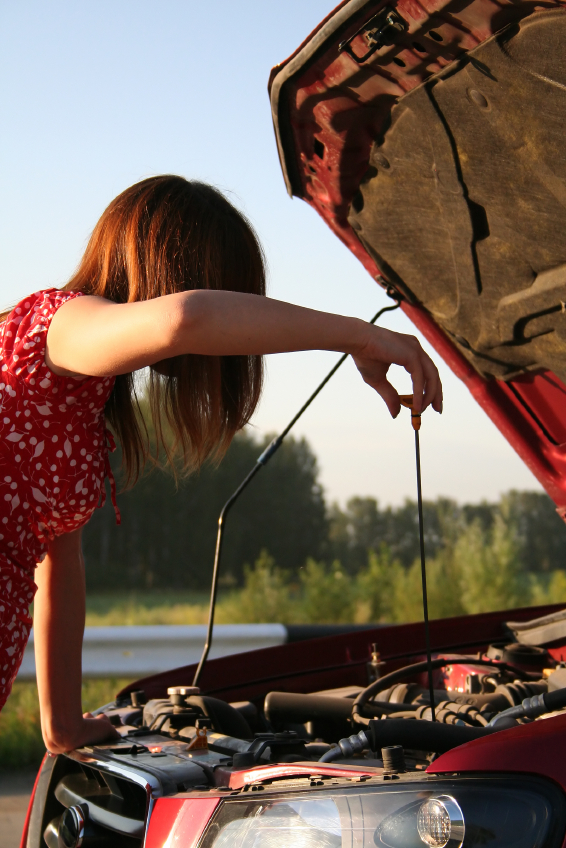 Here are 3 of the things that I learned to do being a trucker’s wife:

When my husband was out changing the oil, if I had the chance to be outside with him, I would be right there asking questions along the way. I did this never knowing that one day I would use the information that I was gaining.

Then one day when my husband was on the road my car needed an oil change. I thought back to what I had learned from being outside with my husband. I thought to myself, this cannot be hard so I took on the task of changing the oil. I was very nervous because I had only seen my husband change my oil once or twice.

One of the first things that he said to me was that I would need to jack the car up. This is something that I did not want to do because I have a fear of the car falling on me. So I thought that I would try and do the oil change without jacking the car up. Luckily for me I am very tiny and I was able to fit under the car without jacking it up so I was able to change the oil with no problems. This was something that both my husband and my neighbor could not believe that I was able to do!

I have also learned how to do some car repairs. This has come in very handy because there again, taking your car into a shop can be very expensive. Not only do we not have the money to take our car into the shop every time something comes up, but we would also be without a car. Being without a car is not something that would be possible for us.

Another thing that I’ve learned to do that has come in very handy is fixing busted water pipes. The house we live in has older pipes and when it gets very cold our water pipes will bust. Having four kids I have to make sure that we have water at all times. Calling a plumber out every time that we had a pipe bust would have been very expensive. So this was another task that I took on to help save us some money.

I have to start out with saying that this job was a lot more stressful than changing the oil because I DO NOT like going under houses and guess where the water leak was! That’s right - under my house. And it was also in a spot that I had to crawl half the length of the house to get to!

I will have to say that I did have two great neighbors come over and help me. This was not something that I did all by myself. Just like changing the oil I had watched my husband fix our water pipes so I knew the basics. But I still needed some guidance. From getting the guidance with that pipe I was also able to fix another pipe that busted with very little help from my neighbor.

Setting & Sticking to a Schedule

Although it is hard when my husband is not home I have found that there are some positive things about him being gone. I had gotten too used to having my husband around to help with anything that may need to be done. Now that my husband is a trucker, I know that I am the one that has to make sure things get done. Because I know that it is up to me to make sure the house gets cleaned, the kids get to school on time, and the bills get paid. I believe that I have become more independent.

I also have gotten the children and myself into a better schedule. Because of my husband’s work schedule, it was hard trying to make sure that we stayed on a good schedule. Then my husband started trucking and not being home too often, so I was better able to implement a schedule and stick to it. I was able to stick with it better because I knew that it was up to me to make sure things got done and that the kids were taken care of. I will have to say that we do still get off schedule sometimes.

Another positive thing that has come from my husband being a trucker is that the children listen to me a lot better. Before, when my husband was home, he was more of the enforcer of the rules. I was the one that would give in a lot and I am no longer able to do that. I have stopped giving into my children and started enforcing the rules and now my children not only listen better but they show me a lot more respect.