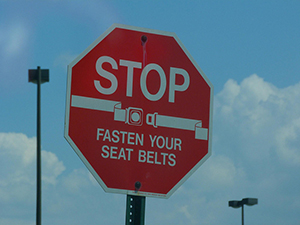 After recent reports of an increase in truck occupant fatalies, manufacturers have begun working on new and improved safety measures for trucks. From 2010 to 2011, truck occupant deaths increased by 20% and injuries to drivers and passengers increased by 15%. Transport Topics reports that this could be caused by highway congestion, the economy causing a higher demand for trucking, and weather events like Hurricane Sandy forcing truckers to stay out on the road when 4-wheelers can stay home.

When the FMCSA surveyed approximately 27,000 drivers on seat belt use, they found that usage rose from 65% in 2007 to 78% in 2010. It's worth noting though that of truck occupants who died in an accident, 33.8% weren't wearing a safety belt. This fact really drives the point home about how important seat belts are.

Volvo designs the engine and truck transmission of their models to drop below the cab in the case that the truck is struck during a front-end collision. The steering wheel collapses and the instrument panel is designed to break apart when making contact with the driver's knees. Active braking systems and lane-departure warning systems are also becoming standard on Volvo's vehicles. This intricate warning system reduces distractions drivers face on the road and notifies the driver when a crash is imminent. The creation of these fancy braking system was motivated by changes to industry regulations that reduced stopping distances to 250 feet from 355 feet.

Mack recently created mDRIVE, an automated manual transmission that includes a nifty brake control button. At any time, regardless of the gear they're in, drivers can push the brake control button and downshift to engage the engine in the high setting. When the brake button is used in conjunction with a standard foot-brake, the vehicle will stop more quickly.

Mack also offers a rollover prevention system called Roll-Tec. If a rollover is about to occur, the system pulls the driver seat down to its lowest position, tightens the seat belt, and deploys an air bag from the seat.

The constant vibration in a truck can expose drivers to back pain and other health problems in the future. Bose is trying to improve driver comfort with their new Ride system. The Bose Ride system reduces bumps and vibrations on the road using magnets and electromagnets to cancel the jarring, as opposed to traditional springs and dampers.

Safety technology in trucks has come a long way in not too many years. What do you think some of the best recent safety innovations have been? Share your thoughts with us in the comments below!