Did you know it could pay off big time (literally) to be a fuel-efficient driver?  PAM Transport truck drivers earned over $600,000 in cash and prizes last year alone.  We’re talking about some serious money and good prizes here!   At the annual MISSION MPG cookout, one of PAM Transport’s top drivers took home a Harley Davidson valued at over $20,000!  And that’s in addition to the cash incentives he received throughout the year.   As you can see in the video below, he was one happy guy!

Notice we used the word “earned” above and that’s because these drivers work hard to put in the extra effort that separates them from the rest of the pack.   Being a more fuel-efficient driver means additional planning, making sacrifices others might not make (such as driving 1 MPH slower) and in general just being a more conscious driver.  As one MISSION MPG driver put it, “you have to drive the truck like you’re the one paying for the fuel.”

What Does MISSION MPG Mean?

So, what’s up with MISSION MPG?  It turns out there’s some real meaning behind each of these letters.   If you’re just joining us, today we’re going to be reviewing the first “S” in MISSION.  But don’t worry, you can get caught up on the “M” and “I” posts by going here. 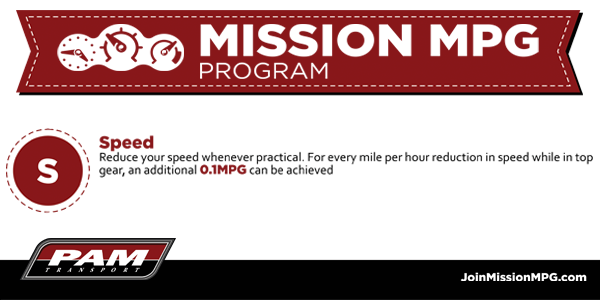 The first “S” in “Mission” stands for Speed:

While getting an additional 0.1 MPG may not seem like a big deal, when you multiply that by thousands of trucks and thousands of miles, it makes a HUGE difference.   As the grand prize winner of the Harley Davidson said, “I’ve been driving at 63 MPH all year for this baby!”  He also made it a point to mention that all of his deliveries were on time and reducing speed does not mean reducing customer service.