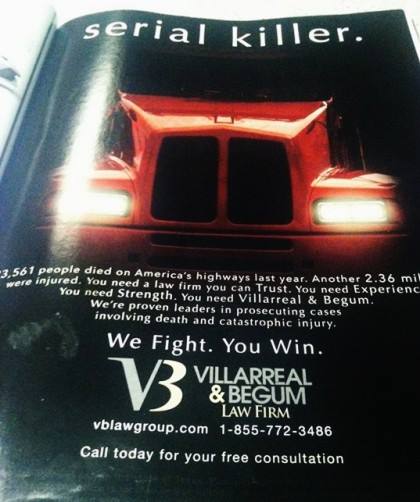 How can you anger an entire trucking community of 3.1 million+ strong?

Just insinuate that truckers are all serial killers. That should do the trick. And that's exactly what San Antonio lawfirm Villarreal & Begum did in a recent ad featured in Maxim magazine.

The law firm's ad depicts a truck with the headline "Serial Killer" along with stats on the number of deaths on America's highways last year. As you can imagine, the ad created quite a stir among the trucking industry...especially on social media.  After all, running an ad that offends 1 in 16 Americans (1 in 16 Americans have a job related to trucking industry) will lead to quite a bit of outrage.  It was so much in fact that the law firm shut down its Facebook page.

This Ad Couldn't Be More Misleading!

Here are the facts according to an article by Landline Magazine:

What Is Being Done About This Ad?

TA/Petro and Pilot Flying J have pulled the edition from their stores. Many are outraged that Maxim even published the ad in the first place, as many of their readers are in fact truck drivers, and their magazines get to the shelves BY truck drivers.

The law firm has since released an apology. Maxim has removed the ad from the digital copy of the magazine and is placing a full-page ad in their next issue promoting the positive side of the trucking industry.

What are your thoughts on the ad?  Who is at fault?