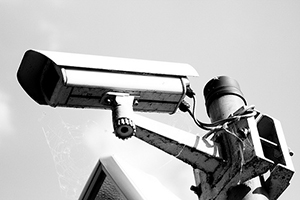 The Trucker’s Report recently wrote about a select few trucking companies that are doing some testing on in-cab, driver-focused cameras for the FMCSA. Why, you ask? To “scan facial features for detection of impaired driving.” Right now, these in-cab cameras are only in a 2-year testing phase. Companies testing out these cameras include Eagle Transport, H&W Trucking, Associated Grocers, AM Express, and a bus company.

As you can imagine, this news has caused quite an uproar among the rather verbal trucking community. Many are beginning to worry about how these cameras will affect drivers and the reported driver shortage. I’m going to play Devil’s Advocate here today and talk about some of the arguments for and against driver dash cams.

“The company can do what it wants – the trucks belong to them.”

I did a little research on the issue at hand and ran across this argument a lot. Many who are pro-dash cam said that because the equipment belongs to the trucking company, not the driver, that the company has every right to install cameras in their trucks if they so choose. While it’s true that a company can do whatever it wants when it owns the equipment, does that necessarily make it moral?

Many assert that a little bit of discomfort (from being monitored) is necessary to improve the safety of truck drivers and passenger vehicles. While I can understand road-facing dash cameras in order to prove fault in the case of an accident, I’m not sure that focusing on a driver’s face for 11 hours a day improves anyone’s safety. I have my doubts as to whether technology can adequately tell me that I’m fatigued – I think I probably know my body a little better than a machine.

“What do you have to hide?”

And finally…the old shift-the-focus argument of, “Well why does it matter? It shouldn’t bother you if you have nothing to hide.” Whether you have something to hide or not isn’t the issue at hand here – it’s whether driver facing dash cams are really needed in truck cabs. I’d venture to say most drivers don’t have anything to hide, but that’s not why they’re against cameras.

This right here is without a doubt the most common argument against cameras driver-focused in cab cameras. Drivers say that they’re unnecessary and violate the privacy of employees who live in their trucks full time. Many have compared it to the use of cameras in bedrooms, bathrooms, and changing rooms. If businesses wanted to put cameras in employees’ bedrooms, it would be wildly inappropriate and lawsuits would pop up everywhere. Is this any different?

“Trucks aren’t the problem – it’s the passenger vehicles that cause most accidents.”

Some question the validity of the safety argument when it’s been proven time and time again that semi trucks are the safest drivers on the road. In fact, about 80% of accidents between a car and a truck are caused by the car. Does this nullify the argument that driver-facing cameras will improve industry safety? Fatigue related accidents are few and far between in the industry, so I’m not sure the driver fatigue angle is a legitimate argument.

“People get into trucking for the freedom and driver-facing cameras take that away.”

Many truckers pursue a truck driving job in the first place because they like the idea of “being their own boss” and being able to plan their own schedules to an extent. Is putting cameras on drivers any different than working at a cubicle and having your boss literally watch over you like a hawk?

What Drivers Are Saying…

Yesterday, we asked our Driver Solutions Facebook fans what their thoughts on the issue are. Here are some of their responses as well as comments posted on this and this article: 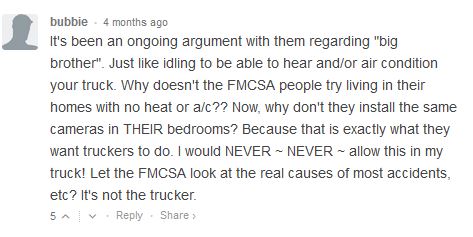 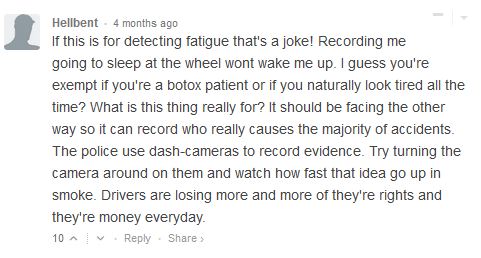 From The Trucker's Report:

Two of the companies being talked about most right now are DriveCam and Transecurity. DriveCam features two cameras – one facing inward to record the driver, and one facing outward to record the road. The device continually records, but only captures information when risky driving occurs. Drivers know an event triggered video capture when they see a red light on the device. Proponents of DriveCam say that since the device only triggers when something happens that you’re not really being *recorded* per se.

Transecurity is the company researching full-time driver-facing cameras. Safety features include forward collision warning, lane departure warning, and driver behavior monitoring. Transecurity’s DriveVision Pro is the product being tested and features five camera angles – forward from the cab, the driver’s face, from the rear of the trailer, and the left and ride sides of the truck.

It’s worth noting that cameras on drivers would not film the sleeper berth, but many drivers feel that even having a camera quite literally in their face all day is still an invasion of privacy.

What do you think about placing cameras in the cab? Share your thoughts with us in the comments below!