Fuel efficiency is a top priority for many trucking companies.  That's why we've been bringing you some tips for getting the most out of every tank.  By getting the most every time you fill up, you save the company money and in turn the company is more likely to show the love!  PAM Transport’s MISSION MPG initiative rewards company drivers for just doing that – conserving fuel and thus saving the company thousands of dollars every year.

This year, PAM Transport awarded over $600,000 in cash and prizes to the company’s most fuel efficient drivers. One driver even took home a $20,000 Harley Davidson!  Now that's pretty cool.

MISSION MPG is more than just a catchy name for the program, though. Each letter stands for a fuel conservation tip. We've already covered the M, I and S - so today we’re going to cover the second “S” in MISSION by sharing some knowledge with you.  Don't worry though, you can get caught up with us using the links below.

What does the second "S" in MISSION MPG Stand For?

The second “S” in MISSION MPG stands for “shifting techniques.” 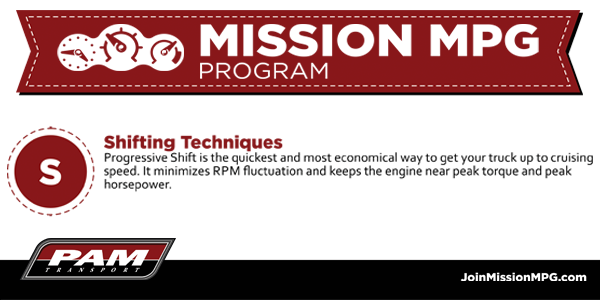 TIP: Conserve fuel by practicing Progressive Shifting. It minimizes RPM fluctuation and keeps the engine near peak torque and horsepower.

What is progressive shifting?

Progressive shifting is when you bring your RPMs up just high enough to shift into the next gear. To practice progressive shifting, drivers change gears upwards as early as possible when accelerating, while staying in the torque range. After shifts are completed, the vehicle should be operating at the lowest recommended RPM speeds.

Have Some Tips of Your Own?

What's Your Shifting Technique? Share below in the comments section!

We will tackle the next "I" in Mission MPG.  Any guesses what it stands for?