So far, Driver Solutions Fan of the Week Michael Zarate has shared his advice for success at truck driving school and discussed how his military experience helped him during CDL training. Today, Michael is going to back up just a little bit to talk about why he wanted to work in a truck driving job in the first place.

It's something I've wanted to do for a long time, but it wasn't a good option to be an over the road trucker when I was younger because I was raising a family.

I was a military child, then I spent 21 years in the military myself, so I love to travel. I've been in 42 different states and 15 or 16 foreign countries. I retired from the Army in 1995 and went into school teaching for 16 years. Last October, I just got to where I didn't want to teach. I enjoyed the classrooms but I didn't like the meetings and the type of work. 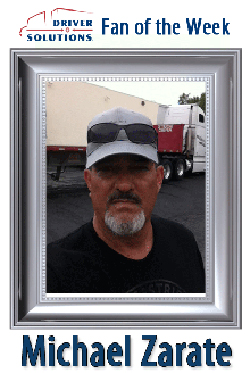 So, I decided to retire from teaching. I'd been sitting around the house for 9 months and realized that I didn't like being retired. So I asked myself what I could do?  I always knew there was a large need for truck drivers. I used to drive down the road and count trucks. In a ten mile stretch, I'd count 100 trucks just from one side of the highway. I was curious where they were coming from, where they were going, and what they were hauling.

I mentioned it (becoming a truck driver) to my wife and told her it seemed like something that would be a fun option to do, and she gave me her approval. You guys [Driver Solutions] couldn't make it any easier to become a truck driver, you really couldn't. I wanted to do CDL training but I didn't want to go out west. People recommended Swift, but their training was too far away. I stumbled upon you guys and applied, and within a couple weeks it was all set up and off to truck driving school I went.

A lot of people said they take on truck driving jobs for the freedom and to make good money. For me, it's an adventure.  I was joking with some classmates that this is like astronaut training for me. It's something that looks fun to do, but I'm sure there's going to be long days and long nights.

When a USA Truck pulled into the trucking school midway through my last week, this other guy and I who were both going to USA went over and asked if we could look in his cab. He had it all decked out with all kinds of cool stuff.

To me it's like going camping, but I think another thing that appealed to me, especially with the over the road aspect, is that it's varied. A lot of drivers want dedicated routes, but I want to take a load somewhere, drop it off, and anticipate with excitement where I'll be going next.  I guess it's kind of the unknown factor. I might be in St. Louis one day and Houston, Texas the next. Who knows where? To me, that's the exciting part of it - the adventure. And going back to states I haven't been to in a long time.

A lot of people said they wanted to do team driving, and I thought it'd be ok if you like the person you're driving with I guess, but you won't really get to know them because when you're driving, they're sleeping. I feel like I'd never feel a sense of being off since the truck just always keeps moving.  For me, if I stopped to do my 10-hour break, I'm not going to sleep for 10 hours, so I'll go into a driver's lounge and talk to people, read, see the surrounding area that I'm in. I want to feel like I'm off duty for that period, not just riding along in the back of the truck.

The appeal of truck driving to me, is the freedom. I've had plenty of bosses, so I don't mind working for people, but the thought of getting up in the morning and getting behind the wheel and watching the landscape unfold just really appealed to me.

Apply Now If you're ready to get on the road to a successful future, apply for a truck driving job with Driver Solutions! Just fill out our no obligation online application. From there, you can schedule a time to speak with a Driver Agent about your options.