Every day starts off just about the same way.  You wake up, read the paper while drinking your coffee and look for a new job that's better than the one you're in now...

You see, maybe it's not so much that your job is really THAT bad as it is that the only thing you see ahead of you is a dead end and a life of living paycheck to paycheck.

After awhile, you begin to realize that no matter where you look you're just seeing the same types of jobs over and over.  Then you begin to remember some things that ran through your head when you were growing up...

You remember what it felt like to sit on your grandpa's lap in his HUGE semi truck and pretend like YOU were driving by turning the wheel from side to side.  You remember that feeling you got standing next to your dad's big rig when he was showing you what that big diesel engine looked like under the hood.

Over the last 23 years, Driver 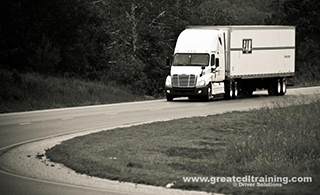 Solutions has helped over 20,000 people realize their dreams of becoming a truck driver.

And many of these drivers had no experience prior to starting CDL training.  None at all.  In just over 3 weeks, they were able to obtain a CDL license and start a new career as a professional truck driver.

Why?  Because these individuals were able to work with trucking companies that pay for CDL training.

Let's take Matt for example.  He was literally shaking after he climbed down from behind the wheel of an 18-wheeler for the first time during truck driver training.  He was nervous.  He was overwhelmed.  But he wanted more.

You see, he knew right away the things he'd done correctly and the things he needed to work on.  All it took was that feeling that comes with operating a vehicle that large to ignite his fire to learn more.  While he was a bit frustrated on some of the things he'd missed, he couldn't wait to get back up there to try again.  You could literally see the thoughts running through his head as he began reciting how he should have shifted during some of the turns.

Through the next 2 weeks, Matt was able to develop his skills and become a confident driver.  Truck driver training enabled him to pass the CDL test, obtain a CDL license and ultimately start a new career.


So, what is the point here?

The point is that Matt had a goal and didn't give up when times got tough.  After being layed off from the USPS, he knew it was his time to make a change.  Suddenly that career he'd always thought about became a reality because the timing was right.

Things weren't always easy for Matt.  Whether it was spending hours by himself memorizing the pre-trip inspection or putting in the extra effort on the range, but he got it done.

A new career wasn't handed to Matt, he made it himself with the help of classmates and instructors.

With a program such as company sponsored CDL training, this opportunity exists for any qualified individuals who are ready to make change.  One of the great things about truck driving is that age doesn't really matter much.  As long as you're over 21 years of age, you qualify for company sponsored CDL training programs.  Many people, like Matt, become truck drivers in their 2nd, 3rd or even 4th career.

If you've thought about becoming a truck driver and find yourself in a similar situation to Matt, you might ask yourself if 2012 is going to be your year?