Wayne Cragg was a driver for USA Truck during 2012-2013.  Below are his thoughts and experiences driving for the company during that time.  The views and opinions expressed below are his and not representative of those of Driver Solutions.

Question
Jenn Marie from Driver Solutions Facebook page asks:  There have been alot of white outs lately and pile ups due to snow.  What advice do you have for new drivers and what can we do to avoid being part of the pile up driving the tractor? Especially if the snow comes out of nowhere? 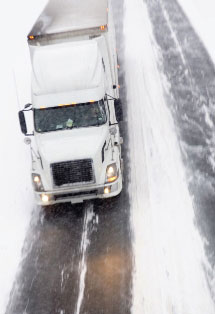 I have been driving in snow for years. I grew up in Michigan and spent some time in the Rockies, and on the West coast. So, I had a lot of Winter driving experience prior to becoming a truck driver. Not in an 18 wheeler, just winter driving overall. I just had some white out conditions not too long ago in Cleveland when the lake effect snow took hold. I truly think there is a big difference between lake effect white outs and a full blown winter storm with miles of white out conditions. Why I say this, is, lake effect snow can be concentrated in a certain area, maybe not more than 5 miles long or maybe 25 miles long. But it can end as soon as it comes. It's still just as dangerous as a winter storm white out, but if you can safely navigate through a lake effect white out chances are it will come to an end quicker than a winter storm or blizzard.

I will slow down considerably during a white out. I never want to just stop though. The pile ups you refer to could have easily happened to me and a bunch of us in Cleveland as someone just stopped their car right in the middle of the road!! I understand wanting to stop, but to stop your car without any idea where you are is very dangerous.  After reading about a few of the pile ups that have happened recently, I believe they happened because someone just stopped their car in the middle of the road during a white out. Also, everyone tends to drive too dang fast in conditions like these. That day in Cleveland I was traveling around 15 mph to 10 mph, cars were passing me very fast and a few ended up in the ditch. I kept so much space between me and the other cars after they passed me that I was able to react to that car that just stopped in the middle of the road. He passed me going very fast then I guess decided he better stop. I already knew there were no cars to my right, but there were cars to my left trying to pass. So I made it to the right side of the road slowly to avoid the other car.

I kept the slow pace going until it ended about 10 miles up the road. In fact, you could see some blue sky after the white out ended. That's lake effect snow for you. You should familiarize yourself where white out conditions happen in the Winter time. You may want to avoid those areas if the weather is calling for lake effect snow. It sure can pile up and get nasty for a long time.  With regards to a full blown winter storm or blizzard, most of the time we know for days and hours before a storm is coming. So trying not to get caught up in a white out in that instance for me would be the way to go. Even if it meant I was going to be a little late for my delivery. I never saw an on time delivery when you in the ditch or in an accident, or worse a rollover.

Take care and be safe,