Most people have a basic understanding of the fact that it takes a semi truck longer to stop than a normal car, yet this seems to be forgotten thousands of times every single day.  So, what's the reasoning for it?  Impatience?

It's so tempting for drivers to speed past a trucker only to cut them off and.... wait for it...slam on the brakes!  So many times a car will cut off a semi truck only to end up stopped at the same intersection as the trucker, just slightly ahead.  What can be done to make this better?

It's a really simple answer - leave plenty of buffer room when you pull in front of a truck so that the driver has enough time to stop.  It's important that drivers understand what total stopping distance means. 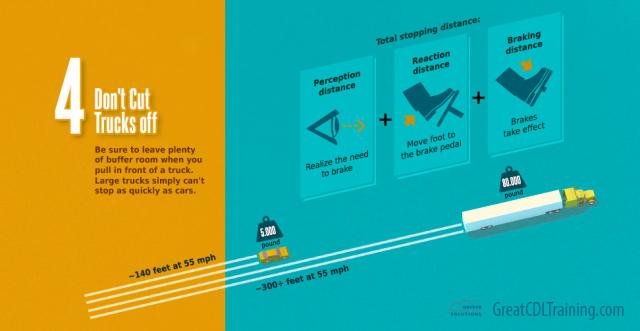 Let's break this down a bit further by defining each:

Just to give you an idea on the different between stopping distance for a car and truck...

There's a really big difference there!  We're talking a full football field vs. not quite half a football field.  When you think of it in those terms it makes things very real.

If you're mostly a car driver, what rule do you practice to make sure you aren't cutting trucks off?

If you're a trucker, what do you do to make sure you don't cut off other trucks should you need to pass them?  Share in the comments area below.